i enjoyed a delightful surprise this week – an old friend tracked me down and invited me to a birthday party for her amazing mother!  Logistics for the party – pulled together on remarkably short notice – changed a few times, but the final venue was at the house of friends in a rural village about 60 miles from my home.

Arrived around 7pm.  It was a blast – old friends, new friends and after a gentle arm twist* (and the appearance of a borrowed guitar), an old fashioned hippie sing along!  Tremendous fun, and i stayed much later than i had planned.

Leaving shortly after midnight, i plugged in the iPod for the drive home, listening to the soundtrack of my current show in an attempt to learn the music.  Tooling along rural roads, singing loudly late at night, it was a good drive and i was still jazzed from the great party.  As i meandered through a small town, attempting to follow signage to get me back to the interstate, i followed a ramp across railroad tracks on a dark stretch of road.

My car slammed across the tracks, and i quickly realized that i’d turned too far to the right on the ramp and had managed to land squarely atop an active set of railroad tracks.  Slammed it into reverse, left front tire spinning (fuck the front wheel drive…).  Immediately realized that i was stuck, had the iPod off, flashers on and was out of the car looking for trains while dialing for emergency help…  Not the most pleasant 10 seconds of my life, to be sure.

Speaking with the dispatcher, he notified local police of the situation and hung up to contact the railroad to stop any inbound trains.  Comforting to a degree, but it was dark, no traffic around and my fucking car was dangling on train tracks.  It was perhaps only two minutes before the police car arrived – two “kids” who looked no more than 15 years old, swimming in their uniforms.  Flashing lights made me feel even a little better.

They took a quick look at the automotive predicament, and after a futile attempt to dislodge the car, decided we’d need a tow truck.  “Fuck.  Gonna take awhile…” ran through my head.  i mentioned that i’m normally a pretty decent driver… and they calmly said “Oh, this happens here about once a month…”.

While one of the young officers went back to the cruiser to call for additional help, a large truck pulls up behind us.  Out pops a middle-aged man and his scrawny 14 year old son.  Just out and about at 1am on a Friday night.  Offered to hook up their tow strap to see if they could pull me off the tracks.

No more than two minutes later, the car was cleared, the tires were miraculously unflattened, i shook their hands and thanked them saying “i LOVE this state!” and was on my way home.  Total time elapsed from getting hung up on the railroad tracks to being back on my way?  About 15 minutes.  Wow…  Workin’ men rock! 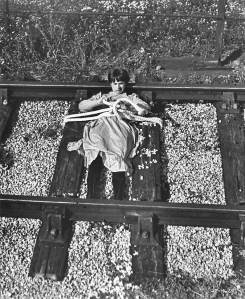 Save me, SAVE ME!

* “daisyfae, meant to ask you to bring your guitar… if we can find one for you, will you play?”  “Oh, no i really couldn’t, i’m terribly out of practice… so what do you want to hear?  i’m taking requests! Enjoy the show, ladies and gentlemen!  Try the grilled shrimp, and be sure to tip your waitress…”