For the past several years, i’ve hosted an open house on the fourth Thursday of November – known to many as “Thanksgiving”, i just call it “Thursday”.

In the U.S., this day traditionally marks the start of the holiday season – a season fraught with emotional peril, along with joy and celebration. Pinned to the holidays are memories – good and bad. As adults, each year adds another layer of memories, and sometimes the holidays can be a dark and swirly place emotionally.

When my children were young, this is the one holiday of the year we claimed as our own – NO TRAVEL! Asking my ex-husband how he wanted to spend the day? “Pizza and football”. Asking the kids, i got “Let’s make our own pizza!” For me? It was a simple “stay home in my damn pajamas with my family.” Combining these elements, we began the pizza tradition.

Through the years, i invited others – the single folks from work unable to get home for the holiday. Those who had family in town, but wanted an excuse to stay away. Or those with nowhere else to go. When i moved into my new place eight years ago, this continued… and grew.

It’s non-traditional, for sure. A make-your-own pizza buffet. Yes, i DO invite people over and make them fix their own food! Part of the process of reclaiming the holiday, i suppose. The practical side is that it accommodates the drop-in nature of the party, and accounts for those who already ate a large meal, and just want to snack and drink. 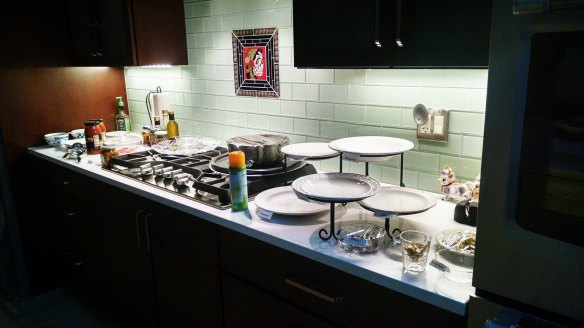 This year, around 30-35 people came and went over the course of the evening. i’ve got a trained collection of Thursday Veterans who know to bring people – and i have met some wonderful human beings at my own party as a result.

Mary came this year, and brought her dog, because dogs are also welcome here. She retired a year ago, and lost her mother shortly afterwards. This is the first year without her Mom and she was dreading being home alone. Her friend, Rachel – a “Thursday” veteran – invited her, explaining “I think I know exactly what you need! Come with us!”

i added something new this year – the “Holiday Baggage Check” stand at the door. Inviting attendees to drop a claim check in the can – and feel free to leave it behind. “I don’t really like my family…”, “I was never good enough for my father…”, “Despise green bean casserole!”…

For me? The baggage has evolved over time. “I don’t want to go to a restaurant on Thanksgiving!” – when Mom finally gave up the traditional meal. “It would be really nice to stay home on a holiday!” during the years before my family time-shifted the meal to the Saturday after Thanksgiving.

Looking through the few bits of baggage left this year… “The ex…”, “Overwhelmed with work – added family stress” and “I miss my mother…”

Pretty sure i’ll keep this as part of the Christmas Eve party. What’s your baggage?

When my children were small, we spent every other Christmas on the road to visit my in-laws in Florida.  Other years?  We were on the road to The Trailer Park by noon to celebrate with my family.  We agreed that as long as we had parents to visit, we would do this.

Thanksgiving was different.  His parents were too far away for a visit.  In my clan, we had time-shifted the meal to the Saturday after Thanksgiving due to issues with divorces, and the resultant logistical challenges.  Never mind that Mom had stopped making a meal* at home in the 1970’s, preferring to go out to eat at a local buffet restaurant.

That’s exactly what we did.  We’d invite ‘stray’ friends over – those who didn’t have family in town.  i’d whip up some pizza dough, buy turkey pepperoni as the only nod to tradition, and we started having a great holiday at home.  Our way.

With the kids grown, and my move to the new place in 2008, i re-started the tradition. Among my friends there was a need for a holiday alternative, so “Thursday” became a thing – a non-traditional meal.  i stayed with the pizza theme, expanded the bar, and opened the doors.

The invite states “Those unable to be with family, those actively avoiding family, those without family, and those who have spent a day with their family and need respite care… Doors open at 6:00 pm, and friends are welcome to drop by until around midnight.”

Thirty or so came and went this year, bringing a variety of goodies to share.  The pool table was used and abused, with the theater room collecting the footballers.  Hot mulled wine, chilled dry cider punch, and a partially successful attempt at bacon-infused bourbon grounded the bar.  Gingerbread trifle, peanut butter pie, and gooey salted caramel chocolate bars appeared on my kitchen counter.  Guests learned to toss pizza dough, and assembled personal pizzas from a spread of toppings. We ate, laughed, and yakked through the night… 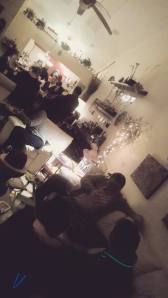 Mr. Pickles, my senior dog, has had recent issues with bladder control. Studley was aware of this, and let him out several times to make sure he didn’t paint the carpet.

Around 10 pm, Mr. P took to intermittent barking.  This is usually due to random signals from the dog planet, but that night it was somehow more directed and urgent.  He’d stand next to someone and bark.  Not begging.  Not needing to go outside.  Not wanting attention.

So we kept taking him outside to make sure it wasn’t urinarily urgent.  i patted him and said “Pickles, shutthefuckup!” more than once.  He continued the intermittent barking or the next several hours.  As the last guests were preparing to leave around 1:30 am, he stayed nearby, and would occasionally launch a solid bark.

As i walked the last couple out, i took him for one last mercy break.  Back inside, i unhooked the leash, and he immediately trotted off to the bedroom.  i went into the kitchen to do the final sweep before bed.  Following my old pup shortly afterwards, i found him sprawled across the passenger side of my bed, snoring loudly.

The next day, Studley and i were doing the “Post-Party Analysis”.  i finally realized why Mr. Pickles had been barking.

daisyfae:  “i think i figured it out!  He wanted people to leave so he could go to bed!  He was trying to chase them away because it was past his bedtime!”

daisyfae:  Yes!  This was the old dog equivalent of “Hey, you kids!  Get offa my lawn!” 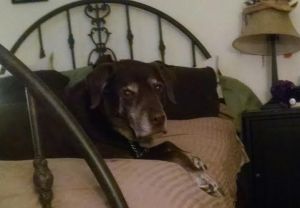 * And we were thankful.  She couldn’t cook for shit…

In the early years, we never got much vacation to ourselves.  Family travel and events chewed up every available day of discretionary leave.  Understanding the clock hanging over the heads of our aging parents, we’d suck it up and dutifully hit the road – especially over the winter holidays.

Alternating the Christmas event between respective parental households, we’d either drive 1,000 miles to Florida to spend a week with his parents, or we’d enjoy a quiet morning rising from our own beds and then haul children, food and presents down to the Trailer Park for the annual flea market and freak show for the rest of the day.

It was the Trailer Park Lifestyle, however, that eventually gave us just one holiday for our own little clan.  With all of the divorces in my family, Thanksgiving was a nightmare.

My sister and brother were often stuck with complex “prisoner exchange” situations, moving their children from one place to another – while attempting to satisfy the familial requirements of the “spouse du jour”.  If they didn’t show up for at least three meals during the day?  Someone was going to be cranky.

The solution?  The Trailer Park adopted a “time-shift”, moving the group gathering to the Saturday after Thanksgiving.  We took turns hosting the meal, it was generally “pot luck” style, and it worked well for many years.

Miracle of miracles, this now allowed for my family of four to create our own tradition.  Given that my ex-husband and i are dirty hippies share “non-traditional” tendencies, we decided “pizza, beer and football – in pajamas” would be the order of the day.  Oh, and we were ridiculously fucking thankful for all of these things*.

The kids were still in elementary school, and i think they both took some sort of perverse pleasure in letting their friends and teachers know that we ate pizza instead of turkey and trimmings.  Not just any pizza, but home made – from hand-tossed crusts, to customized toppings.  One of the few culinary activities i could handle…

On occasion i’d pick up a stray from the office.  Typically single male engineers, away from family and not planning to brave the highways for a taste of Mom’s gravy**.  Rather than surprise them with the meal, i’d warn them first.  “Pizza, beer, football.  Pajamas optional.”

This year, my adult children were at my place for Thanksgiving – and wanted to do it again.  The “gourmet pizza buffet” was on… The kids and i were joined by two of my close friends, and a slew of their own for perhaps our best Thanksgiving yet.

i stumbled through a 5 mile “Turkey Trot” in the morning, then slept for a couple hours.  The Boy just slept til noon.  The Girl joined her boyfriend’s extended family for a more traditional meal in the early afternoon.  Somewhere around 8:00 pm? It just came together…

Laid back.  No formal “seating”, we grazed.  Shared nibbles of unique pizzas, lovingly crafted to our own tastes***.  Alcohol may have been involved.  Billiards and music happened.  Talking smack.  Messing with each other.  Tripping over a big brown dog, awash with canine joy for all the attention and floor scraps.

It was damn near perfect…

Where have all the hippies gone?

* Not just the opportunity to avoid dealing with The Trailer Park.

** Absolutely not, under any circumstances, a euphemism…

*** There was enough meat on The Boy’s pizza to feed a cannibal army.  Must have hit his stomach like a brick.