You’ve seen the episode.  Granny needs a routine medical procedure, but the Clampett’s don’t trust them smarty-pants doctors and them new-fangled doctorin’ machines.  With a show of force that could have changed the outcome at Normandy, the Clampett clan descends upon a poor, unsuspecting hospital staff, unleashing their homespun brand of hillbilly hijinks, and much hilarity ensues. 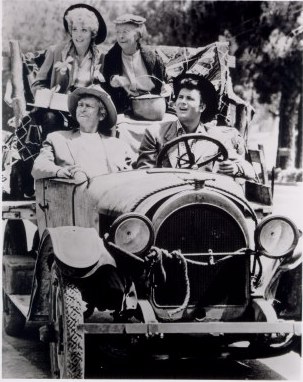 END_OF_DOCUMENT_TOKEN_TO_BE_REPLACED

The big day in Ohio… It is rare when Presidential candidates are not already selected by the time our primary election occurs.  This year, all eyes are watching to see whether Mr. Obama will continue his 11-state streak and knock Mrs. Clinton out of the race, or whether she’ll be the comeback kid, and hang on to fight another day.

I’m very proud of The Girl, driving home late last night (with a ton of pre-final exam academic pain hanging over her head) so she could get up early and vote.  The Boy will be able to vote in the general election in November – and is jazzed about the opportunity.  i can relax, knowing that my offspring have internalized that ‘civic duty’ thing*….

For those who blame remember Ohio as the state that determined the outcome of the 2004 Presidential election, we went another round today with electronic touchscreen voting.  Although there are ridiculous, overblown conspiracy theories regarding what really happened in Ohio during the 2004 election, credible investigative journalists (most notably Greg Palast) provided a reasonable case to call into question the outcome of that election…

In short, it’s likely that the votes not counted in 2004 – “spoilage” ballots** – would have made the race much closer, if not given the win to Mr. Kerry.

Being an uber-geek, i’ve been tracking this issue pretty closely – not just from a procedural, but from a technological point of view.  The Institute of Electrical and Electronics Engineers (IEEE) – one of the largest, independent professional technical societies in the world – felt this issue was of sufficient concern to stimulate research interest in the area, with papers from several symposia captured and published in a book.  The intent was to pre-emptively tackle the standards and security issues and assure that the ‘chad backlash’ against paper ballots from the 2000 election did not lead to an equally flawed electronic approach.

In any case,  i think i voted today…

* perhaps it’s been the past 7 years of me screaming at the television every time my Commander-In-Chief appears on the tube that has inspired their civic interests?  To keep me from stroking out?

** “spoilage” includes provisional ballots cast under the cloud of new identification requirements, and ballots cast in urban precincts, which encountered more cases of “irregularities” with the new voting contraptions than other precincts.

Without doubt, it is extremely satisfying to rant and rage about outrageous and stupid behavior.  In fact, this seems to provide significant fuel for the worldwide blogging community.  This is a good thing, as the release of anger and frustration may prevent workplace violence and road rage.  And, as an added bonus, it’s generally funny as hell…

As I was making my fourth boneheaded maneuver this morning – before I even made it to work – a teeny-tiny, very scary lightbulb appeared over my head….

On my way to a doc appointment before work, the “you’re an idiot and are about to run out of gas” warning light came on, making it urgent to find a gas station on unfamiliar turf.  Successful in my quest, i left the gas station and headed to work.  Not knowing the traffic patterns, i realized that with rush hour traffic it might be hours before i could make a direct left turn from the station.  I conceded defeat, signaled, and waited for an opening – planning a u-turn to recover.

As an unexpected opening appeared in both directions, I lurched into the gap, squealing my tires, turning left with my right turn signal blazing.  A fleeting glance in my rear view mirror gave a glimpse of the driver behind me – shaking his head in disbelief.

He is, at this very moment, blogging furiously about the idiot bimbo in the pimp-gold shitmobile who should be banned from the roads, if not the entire planet.

END_OF_DOCUMENT_TOKEN_TO_BE_REPLACED

If you believe the news stations, you’d think a frosty Armageddon is nigh… Classic shots of brave reporters, bundled in artic gear, standing next to piles of salt in road maintenance facilities.  Interviews with rugged locals sharing survival tips, steeling themselves against ‘death from the skies’.

Fortunately, i know better. And despite the fact that i haven’t been to the grocery in over a month, and there is nothing in the house to eat except a 3 month old, half-eaten box of frosted wheat cereal, stale granola bars, and some Milk Bone shrapnel even the dog won’t eat, i’m not in a panic.

Unfortunately, the store shelves are under assault!  Not only the grocery stores, but drug stores, hardware stores and even the Quick-e-Marts are being stripped clean by blue-haired old ladies frantic to stockpile goods before the storm hits.

Fortunately, I am clever and lazy.  I called out for enough pizza delivered to my door (which i answered in my bathrobe) – that i can survive for 3-4 days if required.  Oh, and i have beer and a full bar.  Forgot to mention that part… pretty important in the decision-making process.

Unfortunately, the prediction is for 1/4″ of ice, followed by 4″ of snow.  Nothing moves on ice, even the 4WD fucktard-mobiles.  Always fun to see them skidding out of control on ice.  Arrogant, stupid bastards…

Fortunately, given that weather forecasts are ratings-motivated, computer-generated hallucinations filmed in front of a green screen, we’ll likely get about 6 hours of rain and wind… with a temperature around freezing.

So, stay tuned!  Will daisyfae end up spending a weekend alone with the dog, drinking beer and gnawing on scraps of fossilized pizza? Will the power go out, forcing her to pull out the gas-powered generator she cleverly keeps in the garage?

Um…I just don’t have any gasoline on hand to run it.  And yes, i could theoretically siphon gas from one of the shitmobiles… if they weren’t both on “E”.

(note to self: get shit together. notify media if i do…)

Winter storm update: Breaking news — despite the best efforts of the media to make something happen, through strategic geographic placement of staff, wearing artic gear, the final result was a short period of ice (between 2am and 3am).  This was followed by about 3 hours of rain… A few accidents in the middle of the fucking night, but nothing caught on tape, suitable for replay on endless loop for the entire season.

Bottom line – an aura of faux relief on the morning news shows, barely masking bitter disappointment… no regional emmy awards for storm coverage likely from this one.  And i will not have to eat pizza for three days.  Ha!

A few years back, as the ‘terror level’ of the people of the U.S. started to subside, Attorney General Ashcroft apparently decided that it had to be kicked back up a notch.  Bam!  Threat Level Orange!

In a now famous attempt to kick-start the fear factor going into a mid-term election, Mr. Ashcroft encouraged all Americans to be prepared for a chemical attack, by keeping duct tape and sheets of plastic on hand.

My Mom, knowing that i dabble in technology and stay current on such things, asked me if it would be a good idea for her to keep supplies on hand, ‘just in case’…

“Mom.  First i want you to do three things.  If you do these three things, then we can talk about the need for duct tape and plastic.”

“Stop smoking 3 packs of cigarettes a day.  I know you’ve done it for almost 65 years, and other than the congestive heart failure, chronic obstructive pulmonary disease, and persistent cough, it hasn’t hurt you a bit… and yes, we think the tar is holding some of your internal organs in place.  Still, it’s a significant risk factor in your life.

“Wear your seatbelt every time you ride in a car.  Especially when you are driving.  While smoking…

“Stop eating a bacon sandwich, with a side of sausage and gravy shots, for breakfast.  Oh, and try to get out and walk just a little bit every day.

“These are the three things that are most likely to kill you.  You are also more likely to die at the hands of an axe-wielding mime than to suffer the effects of a chemical attack, so the fourth item on the list might be mime-repellant.”