My brother arrived at the hospital before i did.  Mom had gone into respiratory arrest, was intubated and moved to the Intensive Care Unit.  It was the third time Tim had visited with Mom in nine months – and this visit was triggered by – and shortened by – a medical emergency.

When Dad was diagnosed with colon cancer, Tim lived in a house about a mile away*.  He didn’t visit much – “I just can’t bear to see him this way…” being the main excuse.  Apparently he couldn’t bear to hear him that way either, as he rarely called.

When Dad started his final lap, Tim showed up at the hospital.  Tears and apologies.  Seeking forgiveness and absolution from his dying father.  Dad gave him that… Tim promised to spend more time with Mom, and not repeat the same mistake.

No one was entirely shocked when he failed to keep that promise.  His third wife made a concerted effort to visit, but Tim would usually bail out – citing a ‘stomach bug’ or other obligations.  After Wife #3 took a walk, there were no more attempts.

Twelve years (and one wife) later, he was a fixture at Mom’s hospital bedside.  He was attentive during the week – many tears, many apologies.  On the days when Mom was somewhat cognizant, she would become agitated whenever he spoke to her.  She had unfinished business with him – and that had become apparent to me as she made adjustments to her beneficiaries while we tackled her estate planning.

After Mom died, Tim asked to be involved with planning the funeral.  He joined us at the church when we met with the minister to plan the service.  My niece sent an e-mail to all, asking for any ‘recent photos of you, or your children’ with Mom.  Tim, of course, had none to provide.  Mom had given me envelopes of cash to deliver to her children and select grandchildren.  Tim’s envelope was a little lighter than the others, and had been marked with a $3,000 withdrawal – a loan he’d received from her to buy Wife #3 an engagement ring.

He asked me about some of the things from her home… Old jewelry… The coin collection… Some collectible items… “We’re not ready to deal with that just yet”, with the mantra “Be kinder than you feel” scrolling on continuous loop in my head.

Several cousins came for the funeral, but my cousin Penny and her family hadn’t been able to attend.  She still wanted to visit and pay respects.  We arranged for Penny and her clan to attend the annual “Remembrance” service at Mom’s church last weekend.  Inviting the entire local family, i offered to take everyone out for lunch afterwards to give us time to visit.

With a group of 18, we had to wait in the bar until our tables were ready.  i had Bailey’s and coffee, and bought my niece a mimosa.  Others had coffee or soda.  When Tim and his wife arrived, they ordered bourbon.  i was a bit surprised that they got through two rounds each before we were seated.

Over the course of the next two hours, they drank a lot of bourbon – ordering another drink before finishing the one in hand.  Tim’s wife seems able to hold her liquor, but Tim became loud and obnoxious.  As i chased down our server to get the check, Tim pulled out his phone to share a picture.

“I need to show you something.  If anyone ever thinks I didn’t love Mom and Dad…. This is something I built on my porch… It’s my shrine to them.”

The photo showed a fountain with an integrated propane torch.  “I have a ritual.  Every night, I light the torch and turn on the fountain.  I talk to them.  They know I love them.”

My cousin commented “It’s very nice…” and looked my way with a gently furrowed brow.

My intra-cranial chant was momentarily drowned out by a scream.

“WHY THE FUCK COULDN’T YOU TALK TO THEM WHEN THEY WERE ALIVE?!?!?”

He is doing what he has always done… what he has to do to survive.  Revising history.  He is creating a relationship that was never there.  There is nothing to be gained by calling him out on this.  Nothing can change the hurt Mom carried… The one thing she couldn’t resolve before she died.

“Be kinder than you feel…” and move the fuck on. 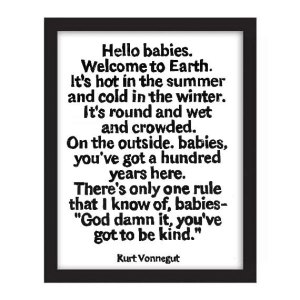 * When he divorced Wife #2, i loaned him money and cosigned a loan so he could keep the house.  It provided a home for him and his three sons, but it was also close to Mom and Dad.  In theory, it would be easy to visit them…