About five years ago, i was at a technical program review held in Hilton Head, South Carolina.  Autumn weather, but it was still rather resort-y and beach-y, and the perfect setting for the Dawg Boyz that i run with to get up close and personally in touch with their ‘stoopid’.

New to the community was a program manager who had just returned from spending several years as our Asian representative, living in Tokyo.  She was then about 50 years old, a tiny waif of a woman, with a penchant for wearing 1960’s era Chanel suits, tailored clothing, and feminine frills.  Perfectly accessorized, too!

Bubbly and exuberant, she was welcomed into the group for an afternoon happy hour by the pool*.  Within minutes, she was regaling us with tales of her time in Tokyo.  How to perform tea service, cultural mistakes that many westerners make in Japan, and how much she adored life in Tokyo.

But what really got her lit up?  She shared with us her fanatical obsession with “Hello Kitty” products! “I’ve got just about everything they make with ‘Hello Kitty’ on it!  I just LOVE ‘Hello Kitty'”

Brief pause in the chatterbox patter, but without missing a beat, she pretended not to hear him, and continued on about all of her collectibles, and how she’s going to build a display area in her house for all of them.

Brief pause, while she re-set her registers, and prattled on about something else.  Knowing she was not going to like the direction of the conversation, shortly thereafter, she excused herself and found less obnoxious tablemates.

Tonight, i found myself chilling with “Hello Kitty” at a local establishment, as we awaited the arrival of a birthday celebrant from the office.  i was there early, and when Hello Kitty arrived, looking lost and confused, i invited her to join me at the bar for a drink while we waited for the rest of the crew to show up.

Really enjoyed catching up with her, she seems to have made a comfortable transition back to the US, and is happy in her new job.  As always, she was dressed in her signature style – 1960’s style conservative suit, complete with matching accessories and white fingerless dress gloves!

Given that this event was being held in something akin to a local tavern, she was the best dressed person there.  By a long shot.  Me?  Black yoga pants, tank top, and baggy overshirt.  Sexy to the extreme…

As we chatted and finished up our beers, our waitress stopped by to let us know that the gentlemen at the table behind us had picked up the tab for our beers.  Mildly shocked by this, as i’ve entered the ‘realm of the invisible middle-aged woman’, i turned to thank them with a smile and tip of the beer glass.

They were a crew of off-duty construction workers, still dusty from a day of manual labor.  Turning back around, i noticed that Hello Kitty was showing a little bit of thigh as she sat at the bar stool.  Complete with a peek at a lace-topped thigh-high stocking!   She was cluelessly flattered by the free drinks – and i had to point out to her that it was obviously because she’d knocked their boots off! 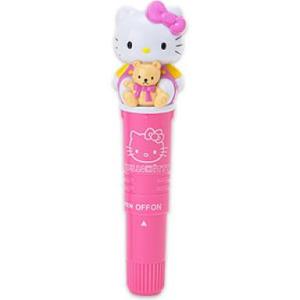 * Rather than pay hotel beer prices, a friend and i had gone to the local grocery store, bought a styrofoam cooler, a couple cases of beer, and 20 pounds of ice.  We were resourceful like that…