“Those are nicer cabinets than the ones I’m putting in my kitchen”.

Dan was half of a two-man crew from Habitat for Humanity, stopping by to pick up the oak cabinets i’d just had removed from my kitchen, in preparation for a massive remodeling job.

“i just want them to find a good home…”

Since i moved to the new place in 2008, i’ve been tackling one project each year. Billiards room, home theater/audio system were top of the list, but the office renovation, theatre room upgrade and fitness center remodel are all completed according to plan. i’d put off re-doing the kitchen because it would be more expansive – and expensive.

Initial plans were more modest, but once i realized that Mom and Dad’s final gift would be more than expected, i decided to go balls out – and make it a dream kitchen. Serious design work started in January with a professional, and i pulled the chain in March when i placed the order for cabinets.

And then the guilt started to work on me… My kitchen was perfectly serviceable. Why remove the walls? i’m not a serious cook – do i really need to upgrade to a gas cooktop and double oven?

My facebook-based flea market began in earnest – i gave away two perfectly good tables, a working refrigerator, stove and dishwasher. Donating the cabinets to Habitat for Humanity to make sure someone, somewhere could use them.

Realizing the magnitude of the job, schedule became a challenge.

“i’m going on a two-week European holiday at the beginning of June – can we have the work done by then?”

Did i say those words to my contractor? Yes. Yes i did…

In order to accomplish a 6 week project in 4 weeks, i took on a few parts of the job myself. Professionally trained as a program manager – Cost, Schedule, Performance – this is what i do for a living.  i worked with the contractor (and subcontractors) to run things in parallel where possible.

So i’m the luckiest… The absolute fucking luckiest human on earth right now.

Sure, i’ve worked to earn a paycheck from the day i turned 16. Something in my wiring diagram does not allow me to go without my own paycheck – even when starting university, i was in a co-operative education program  at 19, picking up a job as a secretary in the engineering office during the semesters i wasn’t working full time.

i made the choice to go to graduate school at night, while working full time and breeding. Those years are a bit of a blur, but i did it. So did my spouse.  My husband and i made the choice to live on one income, and invest the other. We lived well under our budget, and prepared to send the two spawn off to university should they choose to go.

Why do i feel guilty? Where does the voice come from inside my head that says “You’re being selfish? You don’t deserve this!”

Is it enough that i know i’m lucky to have found myself here? That i’m lucky enough to have had parents who squirreled away something for their children? That i haven’t been bankrupted by a major medical disaster, or lost my job through downsizing, or random events beyond my control?

As i write this, i’m sitting First Class, given a complimentary upgrade on a flight to Florida for my sister’s wedding. Drinking free booze, and munching on tasty kibbles handed out by a smiling flight attendant.  Unlike the guy that Exile on Pain Street wrote about earlier this week, you won’t catch me bitching about the lack of single malt scotch. i’m pretty happy with my Jack Daniels and Diet Coke. 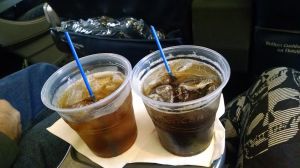 Thirty one years ago today… Driving up that same hill.  Trees blasting color.  An unexpected forest of maples lining a four lane access road on the way into an industrial research park.

It was my first day of work.

Every October, there’s a flashback.  When the morning light is hitting those trees, the anniversary knocks me on the head.

i started as a student lab tech.  There was this guy, and we worked together in the laser test cells.  He was a long-haired genius, and kinda cool, and offered to give me a ride to work if i ever needed, because he lived near the university apartments.

i went over to have dinner with him in December of that year.  i stayed for 25 years.  We jokingly referred to me as the “thing that wouldn’t leave”.

Somewhere along the way, we bought a house, got married, had a kid, bought a different house, and then had another kid.  Raised those kids, bought a vacation house, separated, divorced, and moved on as those kids went off to university.

Through all of that?  i drove up the same hill every October.  Catching the incredible color of those maples in the morning light, and remembering the day i started work.

It’s pretty unusual to have such tenure with an employer.  The “Thirty Year Company Man” is nearly extinct.  It’s been a good ride, that’s for sure.  i’ve done nearly every job available…

Rather than looking forward to what’s next?  i now plan my retirement – five years left if all goes well.  Trying to earn the paycheck.  Trying to be useful.  Trying really hard to still give a shit.  Thankful to have it – but frequently spending time in meetings trying to stay awake by calculating the number of days i have left.

But there were those trees this morning, showing off their autumn finest in the bright sunlight.  They’re thirty-one years older, too.  Like me?  They’re a bit thicker around the middle.  They’ve weathered some storms and are still standing.

But i’m out in five.  They have to stick around…

About 3 years ago, i wrote about a reconnection with a long-time friend, JK.  We’d found each other again after a solid gap of five years — and vowed not to let so much time pass between our conversations.

Well… Three and a half is less than five, so i guess we kinda sorta almost got it right.

Known for his brusque style and ability to follow through on projects, he carried a massive workload before he retired.  He was one of my first, and probably most frustrated, mentors.  We made quite a team back in the day!  Me in the miniskirts and stilettos stumping for funding.  Him doing all of the detail work, and keeping me from overselling the science.

Since our last conversation…

He’s finished up the renovation of his home on a lake, more than doubling the size.  Still has the sailboats, he had to give up competing in the national regattas because he’s blown out his knees.

Still painting… “I’ve got about 48 unfinished canvases in my studio”.

Gardening is now a larger part of his life…  “You oughta see the size of my cucumbers!”

Filling him in on my adventures over the past few years?  On my second motorcycle.  Added a third gentleman to the rotation.  Continuing to attempt to learn to ski – and failing miserably.  Horseback riding lessons have been more rewarding – and far less painful.  Certified as a Master SCUBA diver last year.

JK:  SCUBA?  One of my brothers is pretty serious about that.  I’ve always been curious.

daisyfae:  It’s easy on the joints!  i’ll dive with you…

We’ve each got daughters living abroad – mine in Turkey, his in Central America.  Sons pursuing arts and trades.  Everyone healthy.  Balanced lives – at least for the moment.

As we were planning our next lunch, and i prepared to go back to the office, he mentioned that his son is a finalist in the International Glass Prize competition in Belgium.

JK:  I don’t have much presence on the internet.  I don’t “tweet” or facebook or anything.  It’s some ‘popular opinion’ prize, in addition to the adjudicated prizes.  He could win grants, fellowships and shit…

The plan?  To continue the conversation in his double kayak once the weather warms up a bit.  i’m pretty sure i can talk him into taking out the sailboat again, too…

There are some remarkable works here – and if you feel compelled to cheer for a very talented young man, his work is entitled “Bottle”.  One vote per unique ip address…