Farting around.  Serving no greater purpose than focusing on the moment at hand.  For the better part of the last five years.  It’s what i’ve done.  It’s what i do.

Late last year, i attended a few meetings of a regional bicycle advocacy group.  After a few follow-up discussions, i was invited to join the board of directors.  The group has been in existence since the 1960’s, but became dormant in recent years.  The remainder of the board was making one last run at resurrection – and wanted me to fill the empty board seat.

What the hell?  i’ve been battling a bit of restlessness for the past few months.  They needed what i got.  Were very surprised when they saw my resume – combination of professional chubb with a long history of regional board memberships.  Despite my “Party Girl” reputation…

i started attending monthly board meetings in January, and have been working on a variety of projects and activities on my own time.  Most of our interaction happens via e-mail.  It’s hard to get to know strengths, weaknesses, and styles of colleagues without daily interaction, but we are definitely working through the glitches and getting things accomplished.  They are good animals, and it’s been fun so far.

If i really want to get inside the mind of another human being, i try to elicit laughter.  If you can make someone laugh?  You start to understand how he works.  As i try to get to know the other board members, this has proven invaluable.

The April meeting was on a fairly tight schedule, with a lot of turf to cover.  We met at Archie’s house – bringing laptops, notes and beer.  A nice balance of “business” and “pleasure”.  Much of our discussion was around planning activities for an upcoming event where we hope to make a visible splash with our resurrected presence in the region.

Bob (President, and Serious Businessman):  Would it be possible for us to find a vacant parking lot and launch an exhibition bike polo game?  How much room would you need?

Kendall (Radical cyclist, party animal, and historian):  We play 3-on-3 games, and that includes the goalies.  Would still take a good-sized lot…

daisyfae:  How did you teach the ponies to ride bicycles?

After a beat, three of the guys at the table laughed.  One rolled his eyes.

daisyfae:  It was a joke.  Guess if i have to explain that, it’s a “failed joke”.

Prior to the booze and music cruise, i was sorting options for smuggling alcohol on board the ship – rather than pay the ridiculous prices after we set sail.  Much to my complete and total surprise, it was The Boy who suggested this rather spectacular product:

Oh, it is spectacular in concept.  And a bit brilliant in design!  Unfortunately, it didn’t arrive on my doorstep in time for me to take it on the cruise.  So tonight is the Maiden Voyage of my Wine Rack!  An evening of local theater – which will probably be pretty good.  But i’m practicing for the next bad one i have to endure…

Before i am loaded 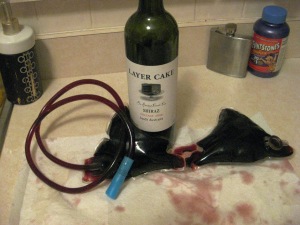 Loading – with a nice bottle of 2008 Layer Cake Shiraz

i’m going to modify the hose to put an actual nipple on it.  the show must go on…

To say that my neighborhood is rather quiet at night is an understatement.  If i go out after 10pm to walk the dog, and i see lights on anywhere?  i assume there is a burglary in progress.  Crickets.  That’s all that’s going on, even on the weekends.

Returning home around midnight after suffering ‘Bad Local Theater”*, i was tired and just starting to lose my “happy li’l wine buzz”.  On his way out, my friend helped me extract myself from the zip-backed sundress i’d worn – right about the time i realized i still needed to let the dog out for “Last Pee”.

When The Girl is home, she has on more than one occasion returned home after getting off work at midnight, to find me standing in the driveway, with a leashed dog, wearing nothing but a long t-shirt.  She has complained that i could easily get caught – but i scoff at her prudish ways.

Since she’s out of town for the weekend, i decided to literally shake it in her face, and proceeded to hook the dog up on his leash, and head out through the garage door wearing nothing but my knickers.  My friend was laughing at my brazen hussery, as he headed for his car.

Halfway down the driveway, between the two cars, i spotted headlights approaching around the corner.  Too close for me to make a run back into the open garage.  Besides, the dog still needed to pee, and would not be denied.  All hundred pounds of his full-bladdered dogness was pulling me down the driveway, and out into the open.

Having no recourse, i ducked between the cars as the approaching vehicle turned the corner.  My friend was at this point laughing hysterically, when i tossed him the end of the leash and hissed at him to wrangle the mutt for me.  The car passed by, just as the dog managed to get the leash tangled on the bumper of the car… forcing my friend to have to crawl under as well to disentangle the leash.

As luck would have it, i heard the garage door of my immediate neighbor opening.  Huh?  i never see these people during the day.  What the hell are they doing out after midnight on a Friday?

Since i wasn’t in the best vantage point, i heard a car door open, and my friend say “Hi”, after untangling the dog, and getting himself out from under the bumper of the car.  Young womans voice saying “Hi”.  Waiting until i heard the garage door going down again – rather than trust his call of “all clear” – i stood up again, generally no worse for wear.

Apparently, my neighbors have a daughter.  A daughter who now thinks the people next door are insane.

* i may have to write this up.  Fortunately, i pre-gamed with enough wine that i giggled my way through two hours of a ‘first-ever’ performed play.  Unfortunately, i was probably too buzzed to remember much of what happened…