Part A: Committees with Women

A friend of mine, KT,  is a member of an engaged group of women living with* breast cancer.  The group does education, outreach, holistic health, nutrition and lifestyle support.  They have one big fundraiser every year, and it is a themed fashion show.  This year, the theme is “Broadway: The Show Must Go On!”

As KT was working with the planning committee, and they ran into trouble thinking of how they could fill a large space with Broadway-related props and decorations.  She remembered my connection to local community theater, and asked if i could assist the decorating committee.

Since it was KT, a woman who humbles me on a daily basis through her strength, compassion and ability to live well, i had to say “Yes”.  i’d take a bullet for her, so working with theater people again shouldn’t pose too large of a problem, right?

Managed to make a few theatrical connections, and get leads on some items that might be useful, and i contacted the three women on the decoration committee.  We arranged to meet up at the facility where the fashion show would be held, so i could get a better idea of the size and layout of the venue.

They were lovely women, and we wasted minimal time getting down to business.  Yes, the size of the venue was going to be a challenge, but they already had an idea of what they wanted, and we were able to quickly agree on the next steps.

Oh, and there was more discussion regarding the “party favors” – the take home item from the luncheon.  One of the members was lobbying hard for a monogrammed martini glass, which could be used to serve dessert, and the other two were worried about the cost, and were arguing hard for the logo on a refrigerator magnet.  They tried to draw me into the discussion, but i knew better…

Bottom line:  Committees with women get bogged down in the most minute details.  In the end, these things never really matter, but many hours are wasted in endless back-and-forth discussions that are one freakin’ annoying ‘road to nowhere’.

Part B:  Committees with Men

Going away party at work for the beloved, and departing, Division Chief.  His five subordinate Branch Chiefs stepped up to work logistics, agreeing to foot the bill for the Division going away gift, and each one would pay for some aspect of the party.  A rational way to do things, much better than the ol’ “Let’s pass the envelope around the office to collect for a gift for the boss” routine.

i agreed to work with my boss to handle our Branch going away gift (a gag gift and a nice bottle of single malt scotch).  She had included me on the party planning e-mail thread as a result.  The “committee” then consisted of 6 men and 2 women, all enginerds.

JT (my branch chief, the chick):  I got the quote on the Division gift – should be able to do it for what we estimated.  How are logistics coming?

Branch Chief A:  I’m planning to get two cases of regular beer (bottles).  Some Budweiser / Bud Light.  Also, going to pick up some additional six packs of “specialty” brews.

Branch Chief B:  What sort of “specialty”?  Something more special than Sam Adams, please!

Branch Chief C:  Are you getting soda, too?  Not everyone is going to want beer.

Branch Chief B:  Should I bring some chips or something?

JT:  Hey, B!  You and C signed up to bring food.  You haven’t even thought about it yet?

Branch Chief C:  Got it covered.  Ten bags of Cheetos.  No napkins.

Branch Chief B:  Oh, yeah.  Forgot about that.  Weren’t we supposed to do something about a cake, too?

Branch Chief A:  Blue Moon, Leinenkugel Oktoberfest, Guinness and some sort of IPA – haven’t decided which one yet.

Branch Chief C:  Do you want me to bring some of my homebrew?  It’s not the best I’ve made, but it’s passable.

JT:  B and C, you were supposed to cover food, including a cake.  I’ll bring some wings, a veggie tray and maybe a cheese plate.

﻿﻿Bottom line:  Committees with men get bogged down worrying about the beer.  Nothing else will get done unless there are women on the committee. 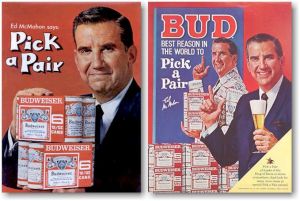 * “Living with…” as opposed to “Dying from…”.  They all have advanced cancer, and for most it’s a question of “When” not “If” they will die from it…