With the Islamic Marriage Ceremony and the Henna Party, two important Turkish wedding traditions had been celebrated. The wedding, as planned by The Girl and Metin, was to be a blend of cultures and traditions.

A traditional Turkish wedding can have as many as 1,000 guests – and is often a simple “Cake and Cola” event held in a salon for an afternoon. They wanted a beach wedding – and wanted to be quick with the formalities, and then on with dinner and dancing!

While she was home in July, we went shopping for a wedding dress. She had been absolutely terrified of getting a dress in Turkey, as the more modern Turkish brides are apparently fond of bejeweled bodices, massive piles of lace and tulle, and all manner of extreme glamour*. “I don’t want to look like a fucking cupcake!”

The dress found her. At a discount bridal shop, the third dress pulled from the rack fit nearly perfectly, and was beyond stunning on her. We had invited her father’s wife, Fahima, to join us for the dress shopping day.  Perhaps the main reason my ex and i have been able to connect well enough to strongly support our kid? This woman has a huge heart, and bubbly personality – and both of my kids adore her! Deciding that the term “Step Mother” has too many harsh implications, she’s been christened their “Bonus Mom”… a bit more appropriate in this case!

The minor alterations were completed just under the wire, and The Girl was able to get everything she needed packed up and headed home. Invariably, the luggage was lost for a few days – “If that dress is lost and I have to go out and buy another one here? AAAAAAAAARGH!” – but arrived intact a few days later.

We also learned that “RSVP” is sort of an alien concept regarding Turkish weddings. They had planned for about 150 people, but the final count was closer to 200. Since it is still somewhat unusual to have a formal sit down dinner at a wedding, i guess it doesn’t seem to be a big deal… i’d have been ripping my hair out, but The Girl and Metin seemed to roll with it…

Metin’s family comes from central Turkey, and over two dozen family members made the trek – at least 20 hours by bus – to get to Izmir for the wedding! He arranged for two tour buses to transport his family, and neighbors, from the city to the beach.

During the reception, Mehmet (Metin’s father) went to find a translator. He returned to our table with The Girl’s friend, Beth, and was enthusiastically asking her to translate something to us. Mehmet let us know that it is Turkish tradition for the parents of the bride and the parents of the groom to personally welcome each guest at the wedding – and he was inviting us to join them in this tradition.  With Beth’s help, my ex-husband EJ and i were schooled in the proper pronunciation of “Hoşgeldiniz!” 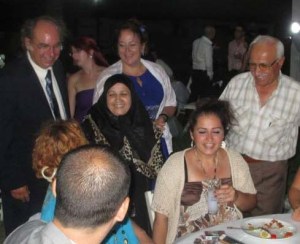 We agreed, despite being absolutely terrified of screwing this up! Trying not to look as mortified as we felt, we joined Mehmet and Haava and began greeting guests – and i can personally attest to the fact that there were at least 190 people in attendance! It seemed to take forever, but Studley assures me it only took about 30 minutes for us to make the circuit. 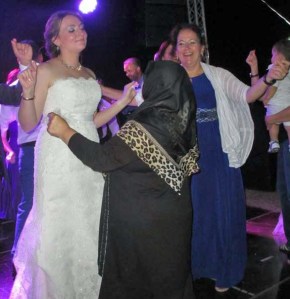 And then we danced. We danced and laughed and danced some more! The newlyweds had pulled together a playlist of both Turkish and English dance tunes. Balancing cultures, they had arranged for each guest to have two drinks – either beer or wine – during dinner. i wanted to be respectful to his family, so it wasn’t until those two tour buses headed back to the city around midnight that i felt comfortable enough to grab a drink…  and have a proper toast with the newlyweds! 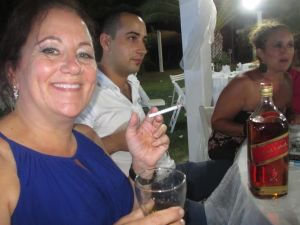 i thought we’d danced ourselves out BEFORE midnight, but i was wrong! The DJ kept going, and so did we! Much relief for all that the formalities were over, and we threw it down hard! Many of their friends had booked rooms at the beach resort, so we didn’t clear that beach until somewhere around 4am. Vague memories of dancing salsa with a pretty Colombian ex-pat, and lying in the grass making friends with a stray dog are also in the mix…

It was a great party… And a beautiful wedding… Celebrating my kid and her husband! Merging two families and two cultures – across the old and new generations – as we cheer them onward! i am delighted that she has put down roots. She has a bigger family! And so do i… 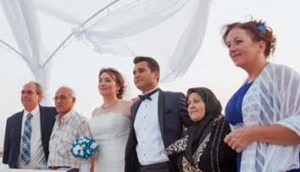 * Some examples can be found here… She made a good call!