Putting my brain on hold, i packed up Mom and Studley, and we headed out to the wedding celebration for my brother, T, and his new wife. As you may recall, my sister S had decided this would be the perfect opportunity to introduce T to a half-brother he’d not known about, and had taken the liberty to invite this half-brother to the wedding reception.

As we were driving toward The Park, Mom was reminiscing about what a complete asshole her second husband had been…

Mom: Cletus was married once before me. They had a child together and then he went off into the Army.  Well, his wife took up with another man while Cletus was gone, and had another baby – that was Dave. When Cletus got back, he never acknowledged that Dave was his son…

daisyfae: Wait… What? You mean the newly discovered half-brother may not, in fact, be related to S and T at all?

Mom: Cletus never treated Dave like his own son, and never took any responsibility for him. Cletus had two sisters who disowned Dave, too.

daisyfae: Can…. Did…. Anyone in the family actually do the math? Has there ever been genetic testing done?

Despite my exploded head, we arrived at the party. Wheeling Mom up to a table, we joined my sister, S, along with her possibly half-brother, Dave, and his wife, Pam. There was another woman at the table, who was introduced as Imogene, Pam’s mother. When joining any table, i do a quick triage on seating – trying to optimize conversation for all, with the least amount of annoyance for me. Studley quickly worked the same social math, and had perched his arse on the back of an adjacent sofa, claiming the prime vantage point to watch the fireworks, without getting hit by shrapnel.

i placed Mom’s wheelchair next to S, who was sitting next to Dave and Pam. i dropped into the seat between Mom and Imogene, who proceeded to tell me her life story. A charming woman, Imogene had just turned 91 years old. Full of spark and playfulness, she wasted no time in sharing her annoyance at being dragged to a party where she didn’t know anyone, as well as pulling out pictures of her dead husband.  i was able to get her chatting with Mom, and made a break to grab a bite to eat.

Studley found me by the barbeque meatballs, shaking his head in astonishment. “Wow.”  My brother, T, and his wife, K, were having a grand time, making the rounds and introducing family and friends. They’d stop briefly to chat, then move on to the next group. A nice collection of humans gathered to celebrate a wedding…

Eventually i returned to the table, and Imogene got going again. Very sweet, very funny, and inquisitive.  She wanted to be introduced to Studley, thinking he was my husband.

daisyfae: No, we are a couple, but not likely to ever marry. We’ve both done that, and are pretty happy as we are…

Imogene: Well, he’s a handsome man, and a real sweetheart! You better hang onto him before he gets away.

Mom: I’ve been telling her the same thing.

Two days later, Studley and i were floating in my pool… doing retirement financial planning – sorting out whether i’ll have sufficient resources to retire early and move the fuck overseas to get as far away from The Park as possible. He has repeatedly assured me that i have more than enough to live such a life, and should really stop worrying about it.

We also did the “after action report” on the previous weekend, which is partly why i needed to go over the retirement financials again. As an afterthought, i reminded him of how much those senior ladies adore him…

daisyfae: You can write your own ticket with the old broads! Between Imogene, and those ladies at the women’s league luncheons, you oughta find yourself an old bat with a lot of cash. Get yourself a Sugar Granny…

Studley: [grinning] What makes you think I haven’t? [dives for safety] 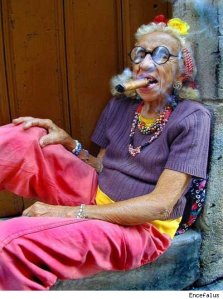 Mom is moved back into her home, and even though it took far too long, it is absolutely perfect for her needs.  When we first began excavations, we had to go through a seemingly insurmountable mess – decades of ‘stuff’ that she simply couldn’t part with…

We used four categories:  “Keep” (put in storage during renovations), “Donate”,  “Garage Sale”, and “Pitch”.  The “Donate” pile was substantial, and Mom’s church had a great inventory that year.  The “Garage Sale” items were parked in her back yard shed for future disposition.

This week, my niece, DQ began rooting through some of those items, and has been working on a family garage sale.  i was surprised to get the following picture via text message last night. 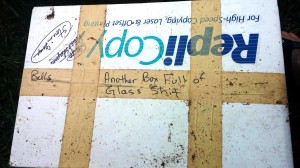 “Another Box Full of Glass Shit”

DQ:  I’m going to assume you’ve been through this box before?

The message from my brother, T, last April wasn’t a tremendous surprise.  He’d gotten married.  What surprised me was that he’d not married the woman he’d been dating for a year, but had met someone new two weeks prior, and found himself completely smitten – head over heels in love, as he’d never loved anyone before.  And they had just eloped.

One of the reasons i can never give up on my brother is that despite things going rather horribly wrong with his first three marriages, he still genuinely and truly believes in the magic and mystery of love.  Most people would be a little bit crunchy and bitter after all he’s experienced, but not T.  At 60 years old, he has found “the one”, and i’m happy for him.

Perhaps a bit skeptical, but hoping for the best, anyway.

Since they’d not had a proper wedding, T and his new bride, K, decided to throw a party this month to celebrate, and bring the families together.  He is in the process of selling his home, and moving in with her, so the location will be near K’s home – conveniently located about halfway between where i live, and The Park.

Mom really wanted to go, so plans were made for my sister, S, to bring her to the event, which is being held this coming Saturday evening.  Last week, i got a call from S.

S:  I have already RSVP’d to a wedding that night, so I won’t be able to stay.  Is there a chance you can bring Mom home afterward?

daisyfae: Sure.  i had tentative plans for later in the evening, but can adjust.

S: I need to go to a wedding at 6, but can then stop by and pick Mom up to bring her to T’s party.  Maybe stay an hour or so, but I really need to get to the reception for the wedding I said I was going to…

daisyfae: i’ll tweak my plans a bit, the party i was going to will likely run late, so i can drop in later.

This really wasn’t a big deal, just a little extra driving.  It was the next bit that scrambled my circuits…

My oldest sister, S, and brother, T, are technically my half-sister, and half-brother, although none of us really think of it that way.  Mom was married twice before she met Dad, and S and T had a different father.  A man who abandoned them, and Mom, when they were small.  There were some rotten things that happened along the way.  Their father was later murdered, and neither of them has much memory of him.

S has been curious about her biological family, and has reached out to a few biological aunts and uncles to better understand his story.  T, on the other hand, has had absolutely no interest in digging into the past, and has made it clear to S that it is not something he cares to discuss.

Last winter, through a genealogy website, my niece discovered that S and T had two half-brothers through their father.  S was able to connect with the wife of one newly discovered half-brother, Dave, and was invited to attend his surprise 70th birthday party.  You would think that meeting a half-sister you didn’t know existed might be a hell of a shock to a 70 year old heart, it apparently went well, and S has maintained this connection.

As i spoke with S last week regarding logistics for T’s wedding reception, i was stunned to find that she’d invited her half-brother, and his wife, to T’s party.

S: I appreciate that you can get Mom home Saturday!  There’s even more complications though… Dave and his wife are coming down to meet T, too…

daisyfae:  Ummmm….  Did you ask T?  Do they realize that this is essentially T’s wedding reception and that he won’t have a lot of time to talk?

S:  I was going to have it be a surprise, but Mom thought I should tell T first.  They know he’ll be busy, but they really want to meet him.  I need to call them tonight.  T really doesn’t want to talk much about the past, either, and said he really wouldn’t be able to sit and chat with them.  Dave had a lot of history he wanted to tell me, but when I told T I’d invited them, he said he really didn’t want to talk about the past at all…

daisyfae:  It really is T’s wedding reception.  Sure, fourth time’s the charm and all that, but it might not be the best time to meet a half-brother you didn’t know you had…

S: Well, they really want to come…  I’ll have to tell them that I won’t be able to stay too long either.  I might show them a picture of you, since you’ll be there with Mom.  Not that I expect you to babysit them or anything…

daisyfae:   Ummm…. maybe you could suggest there might be a better time for them to come down to meet him?

S:  They’ve got their hearts set on it.