In December, i set forth to un-fuck a few aspects of my life.  Nothing huge, just a few necessary course corrections.  It’s going well…

Finger Un-fucking:  After a referral by my general practitioner to a hand surgeon, i was dreading the complications of a surgical “slice and dice”.  Fortunately, this particular surgeon is not a meat cowboy, and wisely prescribed a bit of physical therapy.  Not ruptured tendons, but shredded ligaments.  The resulting scar tissue was keeping my finger curled up like a claw.  Three weeks of PT, and significant improvements had been achieved by mid-February. i continue to sleep in a splint, do my finger exercises, and occasionally wear the spring-loaded torture device prescribed by my therapist.  95% recovered, without spilling blood. Although i will continue therapy on my own,  i consider my finger officially un-fucked.

Space Un-fucking: January saw me tearing through boxes in the garage and storage room.  Many of them full of shrapnel moved into the new place in 2008 by my daughter – she had been preparing for her studies in Beirut as we prepared to move from our previous home.  This led to many boxes of “un-sorted shit”.  Much of that shit has now been sorted.  The trash disposed of, treasures re-packed and safely stored – and dozens of bags and boxes taken to the local thrift store for recycling.  Not only tackling her stuff, i got through much of my own.  Two Jeep-loads* cleared in January.  February and March have been full of entertaining distractions, but i plan to get back to this in April.  My goal is at least one Jeep-load per month removed from my home – trash, or thrift store, i will continue to reduce my footprint in the homestead.

Progress?  Check!  An on-going battle, though…

Body Un-fucking:  It hasn’t been fun, but it’s working.  As of this morning, down 15 pounds since the end of December.  Picked up a regular gym habit, wearing (and using) my fitbit for accountability, and making changes in my food habits – to include portion control, calorie counting, and ‘just saying no’ to the things that will slow down progress.  i feel better, have more energy, and have noticed looser clothing.  Granted, this is my ‘fat’ wardrobe, but being able to take off a pair of jeans without unbuttoning them feels good – especially when they were a bit snug a few months ago.

Having Studley as my ‘accountability buddy’ has been essential — he’s down 35 pounds, and has already approached his goal for the year.  i am both delighted and annoyed by this… He promises to remain my accountability buddy, and workout buddy.

Hmmm…. i guess that makes him my “un-fuck” buddy…

A year ago, i tackled a ridiculous project.  Tearing down a broken upright piano at the theater, i carted it home piece by piece, and re-assembled it in my basement.  It is going to become something else – a Frankenstein piece for my party palace.  When i hit a serious hurdle in November, i parked the project, with hopes of getting back to it in January.

So now, i shall un-fuck my MacGyver project, and get back to work. Leaving such things unfinished is simply not how i like to roll. 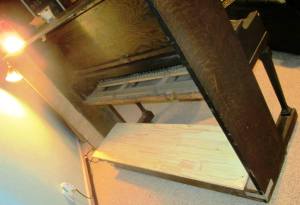 * “Jeep-load” is an acceptable volumetric unit of measure in these parts.  For conversion purposes, “10 Jeep-loads” = “1 Shit-load”.

31 thoughts on “Quarterly Update: Un-fucking Myself”