On Sunday, Studley and i drove The Boy to Capital City, where he was to spend the night prior to shipping out for Army training on Monday. He had to be checked in by 3:00pm, but didn’t need to be back until much later, so we took him out for dinner.  Resourceful as ever, i found an upscale establishment featuring acres of football on flat screen TVs, and scantily-clad lovelies delivering beer.

The Boy demonstrated great restraint – ordering a grilled chicken salad and coke, while Studley and i worked our way through the autumn beer menu, bashed a variety of deep fried appetizers and shared a hamburger the size of a watermelon. At Basic Training, The Boy will certainly have to demonstrate discipline in the face of temptation. We figured it would be good for his training. It was the least we could do.

We discussed the timing of Christmas break, and speculated as to whether i’d be able to send him a small gift box. With only a few weeks into his training, i wasn’t even sure i’d have a mailing address for him by then.

Studley: Used to be that all recruits were forced to write a ‘safe and sound’ letter upon arrival. [in his best Drill Instructor voice] “YOU MAGGOTS GET OUT A PEN! YOU WILL TELL YOUR FAMILY YOU HAVE ARRIVED SAFE AND SOUND. MAKE IT SHORT AND SWEET! THIS IS NOT SUMMER CAMP! DO YOU UNDERSTAND?” That was right before you disappeared off the face of the earth…

The Boy: They might still do something like that. Another way to let us know they own our asses…

daisyfae: But you also might have a chance to write sometime when it’s not forced! i want to know whether your communications are voluntary or directed! We should figure out a code word to add… something that lets me know if you were forced to write it!

The Boy: A word I would never use. “Refreshing?” “Delightful?” Yeah, they’re words I wouldn’t use, but if the DI reads the letter, I’m liable to get beat up…

We went back to inhaling food and drinking beer, while The Boy picked at his salad. It still seemed important to develop a code. It finally hit me…

From the time he could write his name, The Boy made it a point to sign every birthday or Mother’s Day card with both his first and last names, as if i need to know which Boy Fae is offering his kind regards on my days of recognition.

daisyfae: i’ve got it! If you are forced to write a letter, just sign your first name – “Boy”! It will look completely normal to anyone screening the letter, and i’ll immediately know that you were directed to write! If you have some downtime, and they give you the opportunity to scratch out a few lines, sign as you normally would, “Boy Fae”. It’s perfect!

My daily alarm startled me at 0600 Tuesday. i grabbed my phone from the bedside table to silence the beast, and was surprised to find a text from The Boy, time stamped just past midnight. 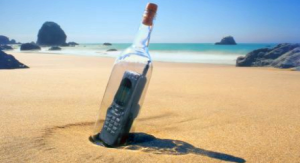 20 thoughts on “Message in a Bottle”