Lavender tassels graced the handlebars of my ancient Trek hybrid bicycle for the last five years.  Studley picked them up on a whim, and presented them to me as part of a birthday present, thinking they would be a fine addition to my goofy-assed ride.

And they were perfect.  A reminder that it is dangerous to take oneself too seriously.  For me, and those i have encountered as i become increasingly visible as a cycling advocate in my little corner of Earth.

Conversation starters at monthly community rides, those cheap plastic streamers were my small means of making bicycling accessible to those who were intimidated by the spandex-clad racing crowd.

My constant cycling companions, the little purple streamers would sometimes wrap around my wrists when we’d encounter a tough headwind.  Caressing me, as if to say “There, there, darlin’… Every little thing, gonna be alright!” 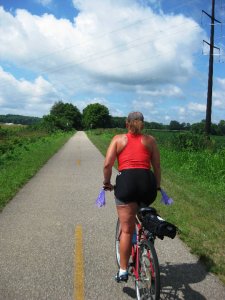 We had just finished a tasty breakfast at a favorite summer haunt, and were returning to the bike rack when i noticed something wrong.

daisyfae:  What the fuck?  Do you see it?

daisyfae:  They’re gone!  Someone took them… SOMEONE STOLE MY TASSELS! 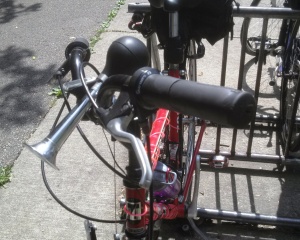 Gone.  In the hour that it took for us to grab lunch, someone passing apparently decided that the tassels no longer belonged on my bicycle, and removed them.  Five dollars worth of plastic that simply could not be ignored.  Not the bike computer.  Not my crazy frame-based lighting peripherals. Not the tool kit in the trunk. My god damned tassels.

Over the course of the past five years, and five thousand miles, i have left that bike all over this fair city.  Chained to bike racks, in “bad” neighborhoods.  Attached to the car late at night.  The tassels have been ignored.  Until this day…

Seeing my de-tasseled bicycle, i was over-powered by a disproportionate degree of rage.  Who would do this?  Why would someone do this?  Would the thief love the tassels, or simply play with them for a moment and discard them?

Hitting the trail and heading home, i was overcome by tears and anger.  i gave into the beast and hammered the ride home…

Studley:  I know you’re pissed — go on, i’ll catch up at some point.  Besides, I’ve got the keys to the car!  You’ll have to wait!

Eventually i succumbed to the heat and exhaustion and slowed down.  Still angry, bewildered, and in no small way heartbroken.  Caught myself looking along the path for a glimpse of my beloved flair – possibly toyed with and discarded.

Allowing myself to be consumed by anger only for the ride home, i had decided that there would be new tassels.  i made plans for a stop at the discount store on my way out for the evening.

Howling with indignation as we completed the ride…

You can steal my tassels, but you shall NOT quench my whimsy, you thieving motherfucker!