Muscling our way down the aisle of an Airbus 320, Studley and i were pretty happy to have wrangled seats on the same flight home after a weekend getaway.  Even though Row 35 is not exactly prime real estate?  i was glad to have a chance to drool on the shoulder i know, rather than the shoulder of a stranger.

We stowed our bags and got comfortable while we waited for the other 98 passengers to board the overstuffed plane.  One of the few perks of “kiss my ass” status on an airline?  Early boarding.  This means you can stow a bag in the overhead bin before they are crammed full.

We were mildly entertained as a raucous family of four occupied Row 34 – a mother, probably about my age, her two adult sons, and the cute blonde girlfriend of one of the sons.  Mom and one of the brothers were across the aisle, and the young couple parked directly in front of us.  Wearing a cocked baseball cap, he was channeling his inner Jersey Shore goomba.  Badly.  But they were having fun, horsing around and playing.

As expected, the overhead bins were soon filled.  People struggled to stuff bags into the few remaining voids.  As we prepared for push-back, the flight attendant offered a warning:  “Ladies and gentlemen, some of these bins will not close!  If we have to pull your bag and check it, there will be a fee.  Please do your best to get your bags into the overhead compartments!”

The bin over Row 34 was in obvious violation.  A late arrival in Row 33 had hopefully put his small roller bag into the compartment, directly under a hinge.  There was no way the door would close.

The young man in front of us decided to help.  Standing up, and making a rather big deal out of it, he tried to force the door to close.  When it didn’t break, or close, he then began chiding the owner of the protruding suitcase that he’d better deal with it…

“Yo, brother!  You’re gonna need to do somethin’ about the bag!  They’ll delay the flight if you can’t get it closed!”

The passenger in Row 33 got back up and started trying to rearrange the bags in the compartment.  He tried to stow the bag.  The goomba felt compelled to provide running commentary and advice.

It went on.  Louder and louder.

Meanwhile, a man across the aisle in Row 36 stood up and checked for space in the bin over his head.  i had noticed this man when he boarded – primarily because of the amount of blue ink on his hands and knuckles.  Prison tattoos.  Including the teardrop* under his right eye.  Without saying a word, he cleared space for another bag.

Goomba got louder and Row 33 passenger became a little more frantic.  Studley got his attention and pointed to the space over Row 36, now cleared.  Problem solved.  Both Studley and i caught the attention of the quiet man in Row 36 and thanked him.

Goomba wasn’t quite done, though. 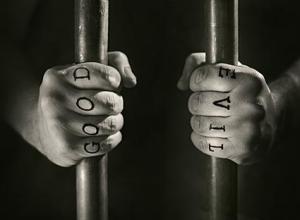 * May be legend, but it is believed that a tear drop tattoo signifies that the bearer has taken a life.  There are other possible meanings.  But the blue ink?  Definitely implies time behind bars.