For the first reunion, Cousin S handled logistics.  We rented two large cabins, in an area that was easily reached by probable attendees.  It was beautiful, but there wasn’t much to do there, other than visit together at the cabins.  And eat.

This time, we agreed that having some outdoor activity options would be nice – maybe rafting, hiking or horseback riding.  Since i volunteered to organize this one, i selected the cabins based on a nearby river run and riding stables.

Even with the events Friday night, and three hours sleep, i wanted to press on with the trail ride on Saturday afternoon.  BJ had been admitted to UT Med Center, DQ and her crew were there.  He was going to be fine – probably released in time for dinner. The rest of us couldn’t really do much to help, so there was no reason to cancel our plans.

i’d worked all arrangements for the ride by e-mail and phone.  Given the sporadic mobile phone service at the cabins, it was hard getting in touch with the owner of the stable.  Even so, by 11:00 am Saturday, i’d reached Larry, the stable owner – he knew how many horses to saddle, and told me when to show up.  He was absolutely delightful, and said he’d be happy to work a custom trail ride to meet our needs.

There would only be five riders.  Hurricane T, partner TK, Cousin L, Cousin S and me.  We piled into TK’s rental car – giving my poor Wienermobile a day off – and headed to the stables.

We arrived a few minutes early to find Landon, Larry’s son, getting our Tennessee Walkers into their leathers.  He apologized that his dad couldn’t be there to meet us.  “He’s been down sick all day with a stomach flu.  Sends his regards, and hopes y’all enjoy the ride today.”

Landon wanted to get a better idea of our riding experience to best match us up with the horses.  Cousin L – who harbours a self-described folly regarding the old television show “Bonanza” – went straight for the Pinto.  Although she hasn’t had much experience on horseback, there was no doubt that was going to be her ride.

Cousin S had not been on a horse for 45 years.  She was assigned to one of the steadiest mounts.  TK is an athlete, from a wealthy family. She had “Western” and “English” riding lessons as a child, and is pretty fearless.  She was given one of the more spirited horses.

When asked about her riding experience, my sister, Hurricane T, said “Didn’t we ride horses and shit in Girl Scouts?  I’ve done trail rides.  So yeah, I guess I’ve got experience.”  She got one of the older horses.

Before leaving, i asked Landon about filling out paperwork, paying, or signing liability forms.

Landon:  We could do that if you really want to, but most people don’t bother.  And y’all can pay when you get back.

We shook hands, and i climbed a stepladder to mount a gigantic horse!  And we were off… 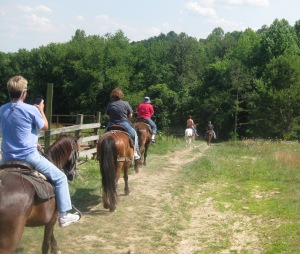 Landon led us out of the hot sun, into the cool shade of the trees.  i rode ‘sweep’.  Having been the organizer of the reunion, i felt responsible for safety.  Mostly, i was worried about my 65-year-old Cousin S, who looked pretty unsteady on top of that big damn horse.

By the time we were 30 minutes onto the trail, i started to relax.  Well… Not exactly “relax”. The pucker factor was down.  i was operating on three hours sleep.  But my horse was pretty laid back and had walked the trails a hundred times.  It didn’t require a lot of concentration…

Watching Hurricane T riding in front of me.  Enjoying herself.  Relaxed.  Hearing TK whooping and hollering ahead of her as we got to a stream crossing.  Smiles from Cousins S and L as we stopped at the halfway point to rest our horses. Landon checked our gear to make sure no one was going to slide off on the uphill trail ahead of us.

Halfway through the weekend.  We were out playing.  Not the same sort of play we’d done as children, but playing nonetheless.

For Cousin S?  A chance to try a new adventure!  i’d asked her if she wanted to shorten the ride from the planned two hours and she said “Absolutely not!”  For Cousin L?  Indulging her folly for a few hours.  For Hurricane T and TK?  Activity – they are pretty ‘kinetic’, and for them ‘doing’ is more comfortable than ‘being’.

For me?  i’d gained an appreciation for the way they do business in this part of the world.  Focus on customer service, even when dealing with a stomach bug.  A handshake for a contract.

And some much-needed equine respite care. 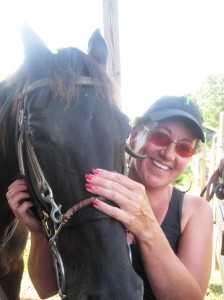