i arrived at Washington National Airport at 7:30 am.  My meeting was south of the city at 2:00 pm.  i had tried to set up other meetings, but ended up with a lot of time to kill.  Rather than rush over to the rental car counter and drive headlong (and sleep-deprived) into rush hour traffic, i decided to snooze at the airport.

Now that i’m on a first name basis with the north African women at the Gordon Biersch brewery on Concourse C, i stopped in for breakfast.  From there?  i found a corner to go to sleep.  My superpower is being able to sleep anywhere.  i was asleep within minutes.

i was awakened around 10:00 am by the sound of a trumpet.  Unmistakable sound of a warm up.  And then a baritone horn.  What the fuck?  School kids on their summer trip to the capital?  Playing a game called “Annoy the sleepy Travel People”?  Grrr….

But the ‘warm up’ sounds were better than high school. Shook off my ‘sleep funk’ and got up to investigate.

Brass Quintet at Gate 35.  Balloons.  What the hell?  Marines?  School kids with flags? 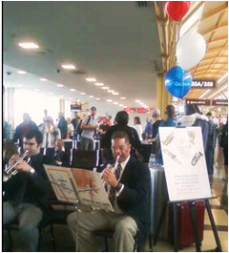 An Honor Flight* was coming in from Fort Wayne, Indiana.  When the WWII Vets come in to visit the WWII memorial, these folks have a welcoming committee.  Music.  Decorations. Greeters. An ad hoc audience of whoever happens to be on the concourse when they get there. This happens a few times a week, organized by the “Honor Flight” non-profit organization…

As they started to deplane, the quintet played military marches.  A crowd of cranky business travel people assembled.  And we stood there clapping for a half hour as seventy men in their late 80’s and 90’s came through Gate 35. 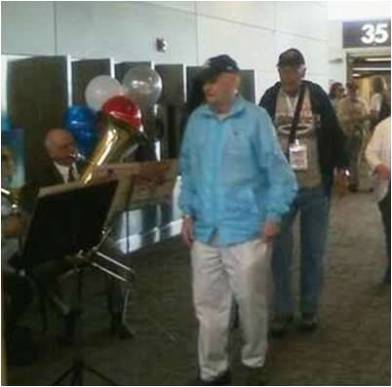 The last dozen off the plane were in wheelchairs.  Wheelchairs pushed by Marines in full dress uniform.

That’s when i completely lost my shit.

Young kids.  Barely old enough to shave.  Young men and women who have already had a few tours of duty in our current war.  Pushing men who had been that age when they went into the unknown.  Both signing on a dotted line that says “Yeah.  I’ll die for my country. Even though I’m probably not really sure what that means.” 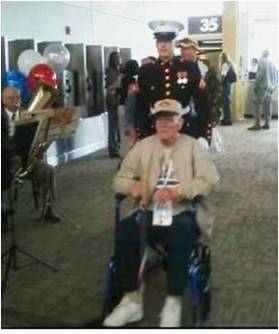 Had to hit the restroom and completely re-do my face before i went to the rental car counter…  Damn it.

“We can’t all be heroes. Some of us have to stand on the curb and clap as they go by.”  Will Rogers

* The Honor Flight Network is a non-profit organization that transports veterans to  Washington, D.C. to visit those memorials dedicated to honor their service and  sacrifices.  At no cost to the veterans.  Nice.