It was just over a year ago that my friend, JB, lost his 16-year-old son to suicide.  It has been an awful year for him and his family.  Initially, he found some comfort in writing, but for the past six months has become obsessed with contacting his dead son through a ‘medium’.  One who is paid to contact the dead.

My initial reaction was one of deep skepticism, tinted with rage at those who would exploit grief for profit.  But JB didn’t need to see that – so i’d listen to his tales of contact, and the latest messages he’d received.  Nodding my head, i’d say “This seems to comfort you.  You seem to be getting the answers you need.  How is your wife?  Your son?  Daughter?  Are you still writing?”

In November, he’d mentioned that his wife and he were not doing well, despite continued counseling.  Asked me if i could take her to lunch sometime, just to get her out of the house.

We met at the local market, which has a wonderful warehouse feel, and a diverse collection of restaurants.  Fabulous people-watching, too.  As DB and i talked, she mentioned that it’s just hard to get out of bed some days.  She’s trying, but there’s not much to look forward to…

i mentioned that i’d added horseback riding lessons to my winter plans, partially to have something to look forward to on cold Monday nights.  Her face lit up – “Oh, I’ve ALWAYS wanted to do that!  My daughter would love it!”

With lots of encouragement from me, and more details on what is involved in the lessons, i told her i’d be happy to arrange for them to drop in!  She seemed interested, but a little reluctant.

With the holidays, then the anniversary of the death, it didn’t come up again until last week.  i’d dropped by JBs office to see how his golf trip to the west coast had gone.

“I felt good!  My game was way off, but it didn’t matter.  It felt good to do something ‘normal’ again.”

From there?  i  encouraged him to get back with his wife about the lessons.  Got him to laugh when i told him i was goin’ “Boot Camp Instructor” on his ass – that this was the time to start moving out on a little more ‘normal’.

On friday, his wife pinged me, and we arranged for them to join Studley and me for the Monday night lesson.

i could write a bunch of shit at this point, but this pretty much sums it up. 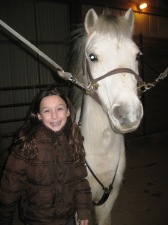 Oh, and i’m getting better.  My steed hasn’t dumped me lately…  The horse, either!

i spend a lot of time farting around – Studley and i have elevated this to an art form.  Selfish time, enjoying new pursuits without purpose or meaning.  It occurs to me that perhaps being “Ambassadors of Farting Around” might not be such a bad thing.

i smiled so much tonight that my face still hurts.

54 thoughts on “Horsing around”