“Each of us has a story to tell.  So do they.  Come hear them speak for themselves…”

Loaded Mom, and my cousin, S, into the car and drove a few hundred miles to attend the “Voices of…” living history event, held in the old cemetery in Mom’s hometown.  My cousin, L, had told us about this during our “Cousins Weekend” last August.

A crew of volunteer researchers from the local historical society, some writers, and a cast of performers have pulled this together for the past four years.  The scripts had to be factual.  The individuals must ‘reside’ in the cemetery.  Ten new stories each year.

i’d had to keep this one to an overnight, due to other obligations.  This was a bit aggressive for Mom, not used to such whirlwind travel.  We’d settled into our hotel rooms by mid-afternoon, and managed to take a brief siesta before dinner.

For a woman who constantly complains about her failed vision, and difficulty walking, she can absolutely haul ass when you put her in the parking lot of her favorite barbecue restaurant on earth.  She didn’t have to ask for help reading the fine print on the menu, either…

From dinner, to the cemetery for the main event.

It was pretty brilliant.  We climbed onto the hay wagon that would take us on our tour just as the sun dropped behind the horizon.  Getting my 83-year old Momma on that wagon wasn’t easy, but she was game.

Stopping at the first location, the tractor was silenced.  Two men appeared from the dark, carrying lanterns.  Telling their tales from opposing sides of a skirmish fought during the Civil War.  It was brief, and compelling.

We continued on, hearing more tales.  Well scripted and well told.  Not sure what i’d expected from this small town troupe, but i was blown away. 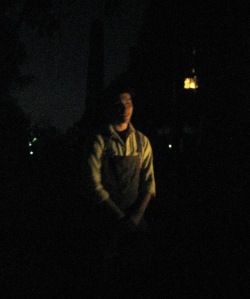 As our tour came to an end, the narrator riding on our wagon said “None of us will live forever.  Only our stories will live on.  What will yours be?” 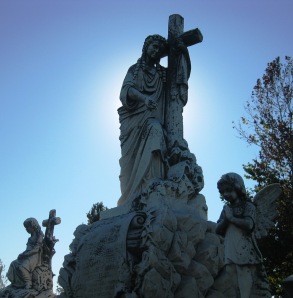 From the cemetery, we headed back to the hotel for the night. Lying in bed, i listened to Mom’s light snores underneath the blast of the television – she can only sleep with the television on for company.

She just turned 83.  She’s got a bad ticker, and the respiratory system of a woman who smoked like a fiend for 65 years.  She was diagnosed with lung cancer at the beginning of this year.

We’re at the “Two Minute Warning”.

The next morning, i woke up to the sounds of her snores.  Relieved to hear them, actually. She was getting up and dressed, as i prepared to do my push-ups.  Five sets.  i rest between sets.  Sometimes for many minutes.  She didn’t understand the process.

Mom:  Why are you getting dressed?  I only counted four sets!

daisyfae [tongue clenched between teeth]: i’m resting.  Figured i’d run down to the breakfast bar and get you a bagel before i do the final set…

We had a nice brunch with local family before heading out to drive the 300 miles home.  As my cousin and mother chatted about various bits of family history, i couldn’t help but wonder “How would Mom tell her story?”

30 thoughts on “Tales from the grave…”