My children did it again…  The Boy came home this week for a birthday celebration, as i turned 49* on Thursday.  They are prone to coming up with clever themed gifts.  This year was no exception – but they made me guess. 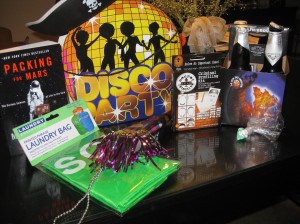 Clockwise, from the left:  A book (“Packing for Mars”), which was not part of the theme, but an actual gift.  Disco Party gift bag, covered with a pirate hat.  Criminal Profiling kit.  Four pack of Fin du Monde beer, one opened.  Five tic tacs, wrapped in plastic.  A party blower, on a chain.  A laundry bag, labeled “Soiled”.

It took me far longer to get this than it should have, as the pirate gear threw me off course, as did the name of the brewery that makes Fin du Monde (Unibroue – pronounced “unibrow”).

daisyfae:  What?  Making fun of my facial hair?  Really?  REALLY?

As you’ve probably guessed by now, the theme is “Date Rape”, bestowed upon me in honor of my recently earned status of “Roofie Survivor“.  The laundry bag is for wrecked clothing/evidence, the blower is a rape whistle (because they couldn’t find a slide whistle), and of course the detective kit is to help find the culprit.

i asked about the pirate hat.

The Boy:  It’s for prevention!  No one is going to try to date rape some idiot wearing a pirate hat!  The Girl disagreed, but I just thought it completed the gear.

After i slammed the opened beer — waste no Fin du Monde, it is yummy — we headed out for dinner.  Followed that up with a few rounds of billiards in the basement, and a whole lot of goofiness.

* More on the rest of my birthday when i have a bit more free time… it was delicious, but i’ve been slammed all week and it looks like more of the same this weekend…