Over the past five days, i’ve done all of the following things, not in any particular order:

– Sang with a rock and roll band in a redneck bar.  Got invited back.

– Laughed my fool ass off at the funniest Broadway musical ever created.

– Was enthralled, and mildly aroused, by the brutal grace of the sport known as flat-track women’s roller derby.

– Connected with a man i met when i was 10 years old, over a gourmet meal he prepared for me, watching the full moon rise over the East River.

– Spent an undeniably wonderful evening celebrating my brother-in-laws retirement… with my family.

– Nearly gotten “Taxi Face” from being slammed into the plexiglass divider in a NYC cab en route from La Guardia airport.

– Carried an empty cat-carrier through a bar saying “Stand back! Lion cub!”

– Failed to recognize my own brother, as he’d shaved his head of the artificially darkened scraggy pony tail, and had bought some new glasses…

– Cast votes in my homeowners association annual election via text message to my ‘proxy’.

– Finessed a solution to a  potentially deal-breaking barrier to a collaboration between universities, industry and government research organizations.

– Drank hot sake with a hot date while eating a $10 piece of raw fish.

– Talked to my dog over the phone.

– Harassed people doing a television shoot by saying “Excuse me, are you somebody?”

– Drooled on my shirt while sleeping on an airplane.

– Fought with a hot date over who got to order “edamame” because we both like saying it.

– Talked to my Mom about budding family disturbance while looking out on Times Square through the same window used by Dick Clark’s cryogenically preserved head on New Year’s Eve.

– Packed for a roadtrip in less than an hour.

– Watched some B-list pop stars dance to their new release in the executive lounge of a NYC bar.  At 4:00pm in the afternoon.

– Talked my sister’s partner off a ledge as she deals with her first serious bipolar disorder breakdown.

– Wrote a blog post that will be read by a couple hundred people or so from around the world… while eating lunch and swilling a couple pints of beer in a fake Irish pub, waiting the start of my next Broadway show… 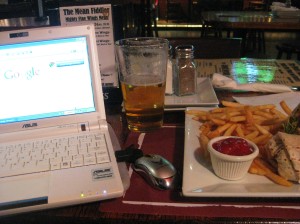 And the question remains:  How did a bedraggled, snot-nosed loser of a kid from a virtual trailer park in the midwestern United States ever land this gig?

52 thoughts on “Letting the days go by…”