Shortly after Dad died, i encouraged Mom to get a cat for company.  A friend of mine had a cat that dropped an unexpected litter so we stopped by and Mom found “Ladybug”.  At first, the cat was sweet and playful, but Mom didn’t like the biting.  She used the “spray bottle full of water” technique to discourage the cat from chewing on her.  It sort of worked, but the end result was that the cat got a little bit nasty.

Mom loved Ladybug, and although the cat made sport of hissing at the rest of us, biting our ankles, and generally making visits unpleasant, she was good company.  When Mom moved in with my niece last summer, the cat had to stay alone in the old house, due to fears that Ladybug would bite the baby, or scuff it up amongst the numerous animals in their existing menagerie.

Ladybug got even more snarly.  Mom loved her, and continued to visit when she could.  Last winter, my niece gave into Mom’s demands to bring the cat with her, and Ladybug was assimilated into the new environment.  Even just a touch nastier than before, but Mom was happy with Ladybug curled up beside her in the bed in the living room.

When i visited last week, it was obvious that Ladybug wasn’t doing well.  She’d been a fat cat, but had become a bag of bones over the past two months.  Mom was trying to fatten her up, but no luck.  When she stopped drinking water, Mom finally got my niece to take her to the vet*.

This past Tuesday afternoon, i got a text from my niece. “Ladybug will need to be put down”.  Asking if it was kidneys, my niece affirmed the dreaded diagnosis, assuring that it’s all over but the hissing.  i asked how Mom was taking it, and my niece immediately texted back “Not well.  Can you call?”

It was very sweet of my niece to reach out for help, and as soon as i could abandon the work project of the moment, i called Mom.  She was obviously distraught.

daisyfae:  DQ told me that Ladybug is in bad shape.  What’s going on?

Mom:  The vet said her kidneys are failing, and he recommended we put her to sleep.

daisyfae:  Ouch.  That’s pretty sad – she was just getting used to living with you again.  When are you going to do it?

daisyfae:  Is the cat suffering?  You don’t want her to be in pain…

Mom:  I don’t think so.  She doesn’t want me to touch her though. She’s not even feeling well enough to hiss at anybody.  I might be ready later this week…

daisyfae [flashbacks to conversations when Dad was on life support]:  But the vet said there’s no way she’ll get better.  It would be horrible if she has to suffer unnecessarily.

Mom:  I just don’t want to do anything too soon…

daisyfae [now having SERIOUS flashbacks to the interminable days before Mom signed the “do not resuscitate” order for Dad after he was full of tubes, in a coma, suffering complete multiple organ failure]:  It’s your call…

In the meantime, my niece, DQ, who has so thoughtfully reached out to get more support for Mom, decided that this would be a perfectly grand time to run the vacuum cleaner in the living room – where Mom was attempting to talk to me on the phone.  Through the noise, Mom finally agreed that she’d need to do it soon, but repeated that she wasn’t ready to let go yet.   Offering moral support, hugs and love, i told her i’d give a call later… 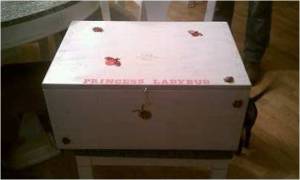 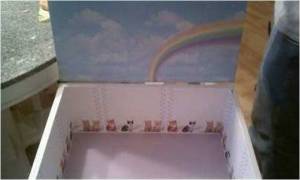 Realizing what this was when the second photo arrived, i wrote her back asking if Ladybug had been put to sleep yet.

On the one hand? It was a beautiful and sweet gesture by BJ.  Clearly, it was meant to help Mom work through the impending loss of her cat, and perhaps even helped speed up her decision calculus, sparing the cat unnecessary suffering.

On the other hand?  BJ has been unable to find the time to continue renovations on Mom’s house, which is why she is still living on a bed in their living room.  He can spend 24 hours making a casket for a cat?

Such is the paradox of The Trailer Park… and an example of why i can’t completely give up on them.  Sometimes all i can do is shake my head.

* The cat.  Took the cat to the vet….  U.S. health care is bad, but not quite that bad.  Yet.  Although it would have been far less expensive if i’d gotten myself spayed instead of doing that tubal ligation procedure.