That’s the fantasy image nursemyra, dolce and i played up for our recent holiday on the sunny island of Lesvos.

As the birthplace of Sappho, the poetess, the village of Skala Eressos has a long history with estrogen.  In recent decades, it has certainly evolved into a pilgrimage location for international lesbians.  Not just a place of historical significance, but a place where same-sex couples can hold hands and cuddle in public, without even the hint of a sideways glance of disapproval from passerby.

The locals – Grecian families who have lived on the island for perhaps hundreds of years – don’t bat an eye.  They run the super market, bakery and retail establishments.  The sexual orientation of customers is of no concern.

During our stay, we easily developed connections with other guests at the apartments – due to the hospitality of the property caretakers.  Every morning, around 1015, we saw Liz, another guest, riding a borrowed bike into the village, swim fins sticking out of her backpack.  She never failed to invite us to join the group of women who did a daily “Swim to the Rock” – a short swim from a local seaside restaurant to a craggy rock in the sea.  And back*.

i was interested.  i used to be a swimmer, but did my swimming in chlorinated concrete pools.  Without waves.  No fish or sea urchins, either.  Living in the landlocked mid-west, opportunities to swim in the sea are fairly limited.

Scuba diving is entirely different!  i have a 75 pound tank full of compressed air attached to my back.  i can breathe underwater that way.  Swimming in the sea?  Without a regulator?  That’s a bit different…  As much as i wanted to try it, i wasn’t sure how it would work.

But Liz continued to invite us.  Every morning.  i bought goggles in town – having been warned that a mask would be helpful to avoid grabbing a sea urchin upon arrival at The Rock.  Liz offered loaner fins.  The weather wasn’t entirely cooperative, as we had a couple of stormy days mid-week, and the swim was called off for safety.  By Saturday morning, i decided to try it.

Prepped like an East German lady-swimmer from the 1970’s, i was ready! 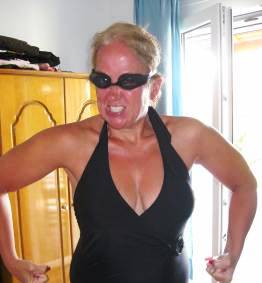 Only three of us swimming that morning – representing three continents.  Liz, from Australia.  Annie, from Scotland. And daisyfae, from the USA.  It just so happens that salt water makes you very buoyant.  D’uh!  i could very nearly float there and back with a light boost from the fins.  Slightly against current on the way out, it took maybe 15 minutes before we were hauling ourselves out of the sea onto The Rock.

Although it was far more of a psychological challenge than physical, it felt great to be there.  Grinning like a loon, the sun starting to climb in the sky and beat down on us, the taste of salt water in my mouth, absolute quiet except the sound of the sea gently splashing us and the rocks.

The view of the village was a little different from offshore.  Always good to adjust your point of view from time to time.

Due to the assistance of a gentle on-shore current, we made it back in under 10 minutes.  Nothing spectacular as far as a workout, but i sure felt like i’d just completed a triathalon as i lumbered out of the water that morning.  Up the stairs, where i joined the non-swimmers, already having coffee.  A round of cheers as i sat down – they were fully aware that it was my first time… 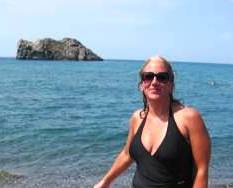 Returning on Sunday for another go, it was a larger group.  Maybe eight of us – including swimmers from Iceland, Scotland, England, Australia and the US.  Certificates of indoctrination were presented to all of the newbies upon our return.  i was officially inducted into the “Women of the Rock Group”. 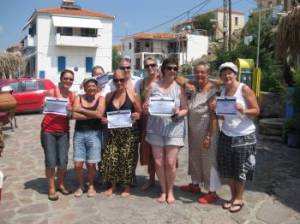 Sure. We played up the “Sapphic Erotica” angle of our visit to Lesvos.  And naturally, we spent some time stripped bare, soaking up sun, and playing in the sea.  There were pedicures.  And oh, the conversation!  Would have stilled the hearts of many mortal men!

The reality of our week on Lesvos was not a lesbian fantasy romp.  Sisters.  Not born, but acquired.  For a week, a month or a lifetime.  The reality of that week was far better than the fantasy.

* She emphasized that to be a member of the “Rock Group”, one had to swim out and back.  Hitching a ride on a kayak or raft for the return trip was unacceptable!

25 thoughts on “Women of The Rock”