Fortunately, they came in waves, with the early arrivals including familes – with ridiculously cute children – a few pregnant women*, and folks with early bedtimes.  Late arrivals?  Last person to show up arrived at midnight.  Fortunately, one early arrival managed to park in my crabby neighbors yard before he got out his “no parking” signs.  Twit.  i hope someone puked in his yard.  Again.

– As a result of this event, i’m even more comfortable with my decision to remain very, very single.  i didn’t have to ask permission from, nor consult with, anyone before deciding to do this.  My house, i can do what i want!  i used to have parties on a much smaller scale when i was first married, but my ex-husband was uncomfortable with it, so i stopped.  The kids loved it when they were little – nothing more fun than watching grown ups get silly!  Now?  They still love it… and can play along!

– Naturally, we took advantage of the opportunity to taunt one of the celebrants when he went down for the count.  Didn’t really pass out fr

om alcohol consumption**, just tired.  In addition to the standard “write on his face with markers” trick, we photographed him with a stuffed sea monkey i happened to have on hand, reminding all party goers to keep an open mind – “It’s not beastiality, it’s interspecies erotica”.  Oh, and we put a temporary tattoo on him.  A “tramp stamp” above his ass crack.  Suspect he won’t realize he has it til he’s showering at the gym next week.  Hopefully, we used the “Exit Only” tattoo…

– The Boy made it home, and was awestruck to find not one, but three kegs awaiting him.  One still half full of Guiness.  His eyes shone the way they used to on Christmas morning!  The look on his face was precious as he toyed with the idea of moving the keg to his bedside.  Auto-beerotica? 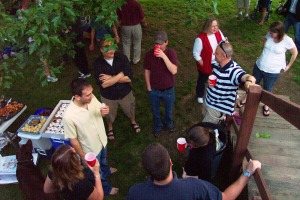 attention.  Sticky children, covered with tasty food bits to lick.  Wayward jello shots to eat from the ground.  If you look closely in the lower left corner of the crowd shot, you’ll see that there is a large brown animal cruising the food table…  He hasn’t moved much today.  We were both on the move for over 8 hours – me moving food, drink and trash, him playing with new friends!  It’ll wear a pup out!  On the bright side? No one threw up on him this time***.

It was a good time.  One of my young friends thanked me – saying that my willingness to do this, to bring people together for celebrations, helps make the workplace more tolerable.  And i truly enjoy it – when i’m not beating myself over the head, saying “i’m too fucking old to be doing this!”

Perhaps the entire situation is best summarized by a conversation with The Girl tonight.  i was sympathizing with her regarding the state of her parents.  Her Dad is living with a “crazy selfish bitch” and her Mom is hosting frat parties and doing keg stands in the back yard.  Her response:  “Shit, it’s even worse than that.  You guys are both probably getting more than either of us… That’s just sad…”

* Also known as “designated drivers”.  One spouse has been pregnant at the last two parties, and begged me to have another one after this baby is born so she can eat the jello!

*** Perhaps only because Mr. Pickles was outside when the young man who’d experienced far too much intimacy with a bottle of vodka decided to paint my living room floor.  A shade called “Grey Goose”.

20 thoughts on “Friday Night Throw Down – Scores and Highlights”